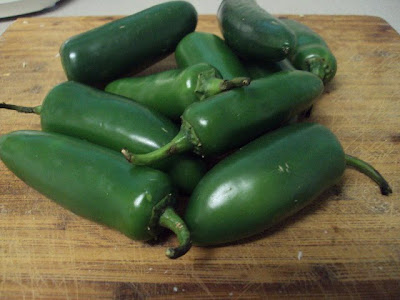 Back in high school, I used to love stopping by the local grease-joint, aka, fast food restaurant, for an order of jalapeno poppers. I got so hooked on those things that I set out to making my own. So when nobody was home, I took some little green chili's, filled it with cheddar cheese and dropped them in hot oil. That's exactly how you don't make jalapeno poppers. A good start would be to use jalapenos, of course, but what did I know? That was probably my first expiremental cooking adventure. It would be another 8 years until I was married and perfecting this hot and spicy snack for family and friends.

After much research, tweaking and accidental eye-rubs (ouch!), I think I've got, alhamdulillah. At least the brothers who cleaned off a tray of them in a matter of minutes seem to think so. 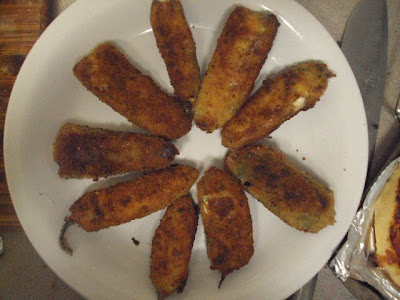 Jalapenos, washed and cut in half length-wise

Filling: (amounts vary according to how many peppers you need to fill, plan for about 1tsp filling for each half pepper; alternatively you can use a vegetable dip or flavored cream cheese)
cream cheese
salt to taste
garlic powder
dry oregano
dry basil
sprinkle of grated cheddar cheese

1. Blanch peppers for 1 minute, immediatly remove and drain on paper towels (blanching too long will give you limp, floppy peppers that are hard to fill).

3. Dip the chilled peppers in egg and roll in bread crumbs. Place back in fridge for another 10 minutes. Repeat this process three times, making sure to chill for 10 minutes in between each coat.

4. Shallow fry in medium low oil until evenly golden brown; drain on paper towels. Sprinkle with salt and enjoy!
By The Muslim Wife's Kitchen at 10:58 PM