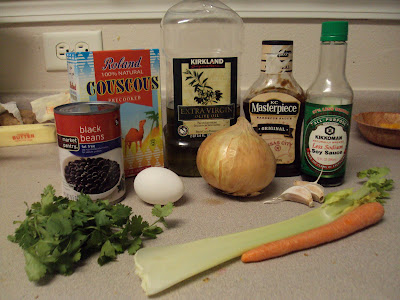 I'm not a fan of veggies, yadda yadda yadda, I try to eat more, blah blah blah ; you've heard the story a dozen times. And in my defense, I think I've come a long way. But when it comes to the world of vegetarian eating, there's one food I have no problem with: the veggie burger. 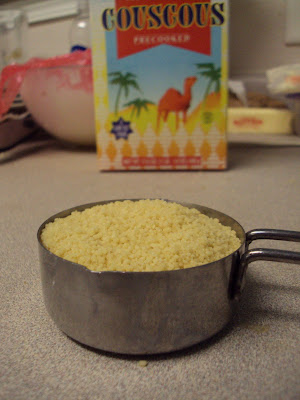 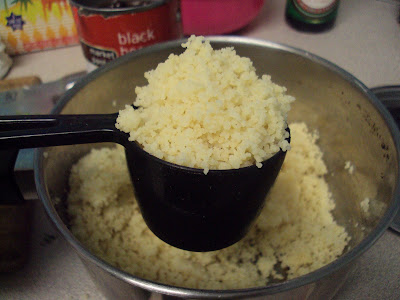 I'm head over heels for any meat-alternative burger (veggie, bean, soy, etc.) and spend a bundle on those frozen soy patties .So you could imagine how happy I was to find out I could get about 12 patties from a .79 cent can of black beans! And now you know that in addition to not being wild about vegetables, I'm also a cheapskate. Moving on... 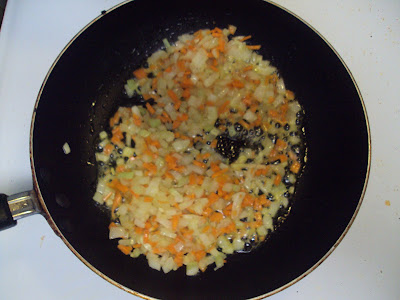 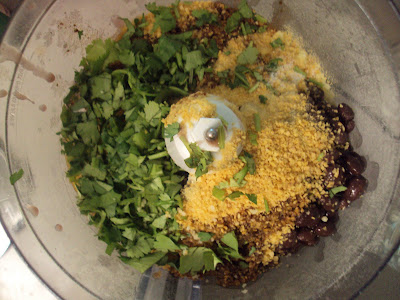 If you've been reading MWK long enough, this may seem like a repeat recipe of a black bean burger I tried out a while ago. But trust me, the difference between these two recipes is like night day. While that one was boring and tasted like mushy black beans (which basically sums up the recipe quite well), this one has body and is jam-packed full of flavor. 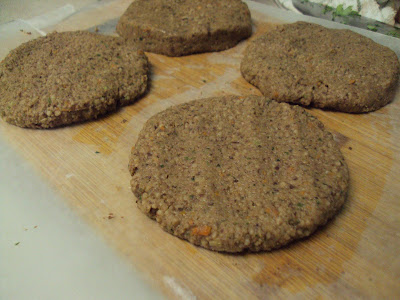 The original recipe calls for bulghur (which you may remember from kibbeh or tabouleh) but I didn't have any at the time and opted for cous cous. It definitely worked, though I added almost twice as much as what the original bulhur amount until the mixture came to a consistency that I was happy with.In addition to the mountain of vegetables, this burger actually has some flavor thanks to the BBQ sauce and soy sauce, but feel free to add your favorite spices too (I think Cajun spice would be awesome in this!). I left out the walnuts because I was lazy and it was still great. Definitely give it a try and I'm pretty you won't even miss the meat! 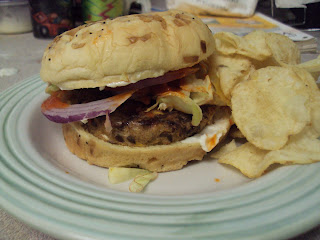 
1. Prepare burghul (barely, or cous cous, whatever you're using) according to directions, let cool completely.

2. Heat 2 tablespoon olive oil in a large skillet over medium heat. Add onions, celery and a pinch of salt and cook until golden, about 12 - 14 minutes. Add garlic, 3 tablespoons of barbecue sauce and the carrot. Cook until the mixture slightly driest out, about 2 minutes. Transfer to a food processor and let cool completely ( I rushed it and waited until it was warm, but for safety reasons you should let it cool completely).

3. Add the burghul (or cous cous), beans, breadcrumbs, walnuts, soy sauce, egg whites, parsley and 1/2 teaspoon salt to the food processor. Pulse until finely ground with some chunks ( I pulsed until pretty smooth, that's just my preference). Form into patties 4" wide  and about 1/2" thick. Place onto a wax paper lined baking sheet or tray and refrigerate until firm (1 - 4 hours).

4. At this point, you can freeze whatever you want until later or cook them off right away. Heat remaining 1 tablespoon in a large skillet over medium heat. Cook patties in batching until golden, about 6 minutes on each side. Serve on toasted buns with the remaining barbecue sauce.