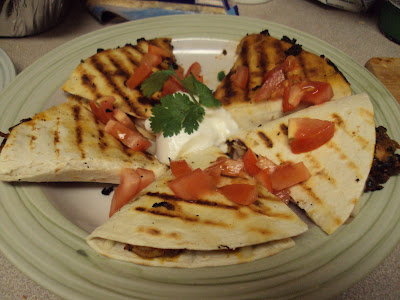 My Mom always says the impromptu, unwritten recipes always turn out the best. The kinds of dishes that are inspired by your personal palette and a dire need to use up the last of the leftovers and not a finished product of someone elses taste preferences. And like more often than not, Mom is right again. 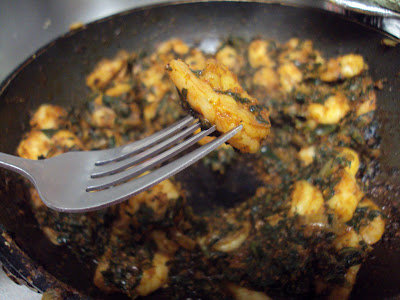 I had a few tortillas left in a the cupboard, half a box of frozen spinach, a couple spoonfuls of sour cream and a bag of frozen shrimp taking up space in my freezer for the past several months. So in other words, I had the ingredients for some spinach and shrimp quesadillas, alhamdulillah. 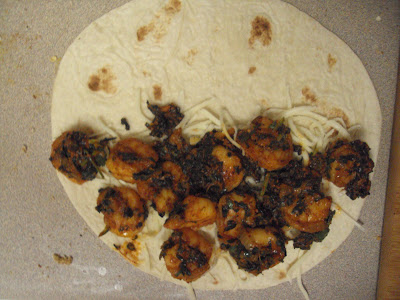 That being said, I urge not to follow this recipe step by step (unless you want to, that is), rather use it as a spring board to experiment in the kitchen. Hide the measuring spoons, rely purely on taste-testing and what you can find in your fridge right now and have a go. The most important thing is trusting yourself as the cook and having the confidence to whip up something on your own and having it turn out fabulous, insha'allah! 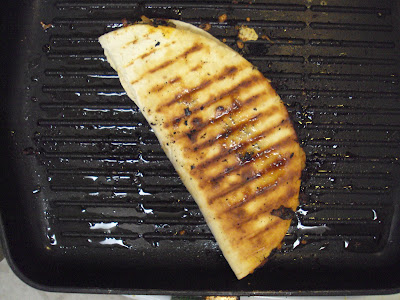 Oh, and when it come to quesadillas there are a couple things to remember: don't over do it on the cheese, just sprinkle a light layer of your favorite and most-melty cheese on half of the tortilla, lay your filling on top and another light sprinkle of cheese on top of that. In this way, the cheese will melt and act as a glue keeping the quesadilla in one piece. You don't need a grill pan (but you'll get pretty grill marks if you use one!), any large skillet will do...the key here is to have it nice and hot before you throw the quesdilla in it. And the most important tip is to not flip too soon. If you attempt to turn it over and it begins to open up or is still floppy, then it's too early to flip. If you pan is nice and hot and the cheese melts, then the quesadilla will feel firm and crisp on the underside, making the flip very easy and smooth. 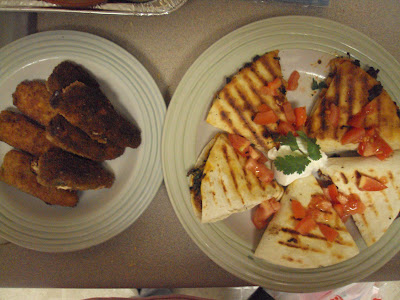 1. In a bowl, combine shrimp with adobo and cajun seasoning. Set aside.

4. Assemble tortillas by layer cheese, filling and a little more cheese on half of the tortilla. Fold the top over and carefully place in lightly oiled skillet/grill pan. Allow to cook fully on one side before filling (refer to notes in post), about 2 - 3 minutes.

5.  Remove and cut in to wedges. Serve with optional cilantro, sour cream and tomatoes.