(warning: all pictures in this post are downright horrible; my camera was out of commission and I had to resort to my grubby camera phone. I'm hoping to make this recipe again in the near future and promise to get better pictures insha'allah, until then, these will just have to do!) 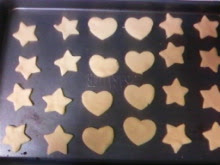 I was never so much into those little yellow gold fish crackers...they just didn't taste cheesy enough for my liking (and its no secret how much I like cheese), and I've never understood how kids seem to be addicted to them either.. Cheez-its were a bit more up my alley but its not like I was crazy about them or anything. 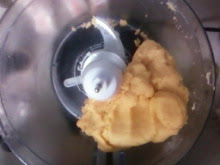 But now I have kids of my own and though they don't each goldfish crackers(too much doubt about it being halal) they do love crunchy little snacks. So when I first saw this recipe, I thought of them. When I first tasted it, I thought of only myself eating the whole bowl. Only kidding (sort of)! Don't get intimidated by the idea of making crackers from scratch, they come together so easily and have so few ingredients you'll really be amazed. I suggest rolling them slightly thinner than the recipe calls for to decrease any major puffing. Skewering holes into the pre-baked crackers also keeps puffing to a minimum, you can see I went a little crazy with my holes; one or two per cracker would be just fine, too. 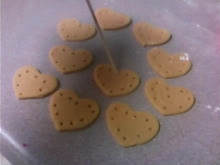 I originally made these for a play date but I gotta say, the adults seemed to enjoy them just as much as the kiddos. They kept well for a couple days in a sealed container but remember, they're homemade meaning no preservatives or chemicals so don't expect them to stay crisp and fresh for so many days. Happy crackering! 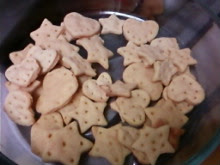 Preheat oven to 350°F. Combine all ingredients in a food processor, running the machine until the dough forms a ball, about two minutes.

If the dough feels warm or worrisome-ly soft, wrap it in waxed paper or plastic wrap and chill it in the fridge for 30 to 45 minutes. This also makes it easier to transfer shapes once they are rolled out.

On a lightly floured surface, using a lightly floured rolling pin, roll the dough out 1/8-inch thick. Form shapes with a cookie cutter, dipping it in flour from time to time to ensure a clean cut. Gently transfer crackers to an ungreased cookie sheet with a 1/2 inch between them. Bake the crackers on the middle rack for 12 to 15 minutes, or until they are barely browned at the edges. Remove from the oven and set the cookie sheet on a rack to cool.
By The Muslim Wife's Kitchen at 3:30 PM